De Kas is an Amsterdam institution, dating back to the early noughties. It has featured in many ‘best of’ lists over the years and set the scene for a popular Dutch novel. It was one of the first places I ate in Amsterdam when I moved to Holland in 2009 and has remained a favourite. When I first visited, I was a fussy eater who refused to eat fish and was terrified of set menus. The dishes at De Kas persuaded me to try things with an open mind, like sweetbreads, and encouraged me to be a bit more adventurous in what I ate.

Very little has been changed since 2009. It still grows a lot of its produce in the greenhouses that surround the kitchen and the rest on a farm near Amsterdam. The staff wear the same indigo denim uniform. The interior is identical, from the giant glass jellyfish lights in the centre of the room down to the Ittala water glasses on the tables.  Despite this, it is all on trend for 2018, from the farm to table concept to the sophisticated but welcoming interior. Even though it opened almost twenty years ago, the dining room looks as contemporary as any new Amsterdam hot spot. 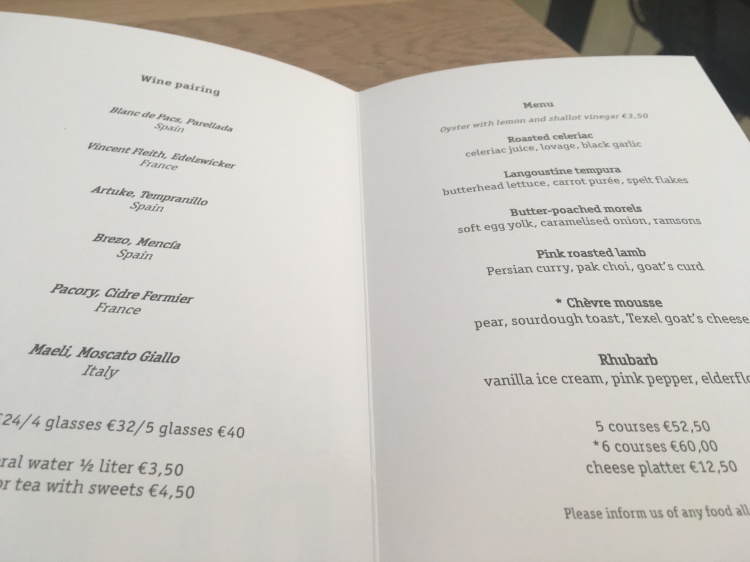 The one thing they have changed recently is the menu, after bringing in Jos Timmer and Wim de Beer from Michelin-starred Rijks. The three course surprise menu has been updated to a five or six course menu of small plates that changes each week. The focus is still on their own produce,  supplemented with small amounts of meat and fish to balance them, but a more refined style.
We were served popped tapioca crackers with celery mayonnaise and bread while we looked at the menu and chose our wine. Their commitment to Dutch producers goes as far as including a Dutch wine, Wijngoed Thorn, on the menu. This made the news last year as the first Dutch wine to be granted a PDO status.

After ordering a bottle of the pleasant if unremarkable Wijngoed Thord pinot gris, we were served an amuse of beautiful herb gazpacho and piccalilli radishes dusted with popped grains. Moving onto the menu proper, our first course was celeriac with lovage and black garlic. This was followed by the star of the meal – a deep fried langoustine with horseradish mayonnaise and a ginger shellfish bisque. This dish was perfect mix of rich and fresh. The rich bisque cut with ginger was one of those things you want to go home and try to recreate yourself.

The butter poached morels were lush and even managed to lure me into eating my most hated food, egg. The main dish, lamb with Persian curry and herbs, was fine but unadventurous. The sauce gave me flashbacks to the curry sauce served from giant tubs in industrial quantities in my university canteen many years ago, although that’s not exactly De Kas’s fault. If I was going back, I’d definitely try the vegetarian option, as the work with vegetables here is way more interesting. The dessert was a well-executed riff on the rhubarb and white chocolate theme that’s popular these days. I’m not a big dessert fan, but this was a lovely end to the meal. My last visit to De Kas was probably about three years ago now. While I still loved the space, I had found the menu was a little less exciting than it had been. The revamped De Kas menu is exciting and enjoyable, and definitely puts it back  squarely on my Amsterdam culinary map.
De Kas, Kamerlingh Onneslaan 3, 1097 DE Amsterdam